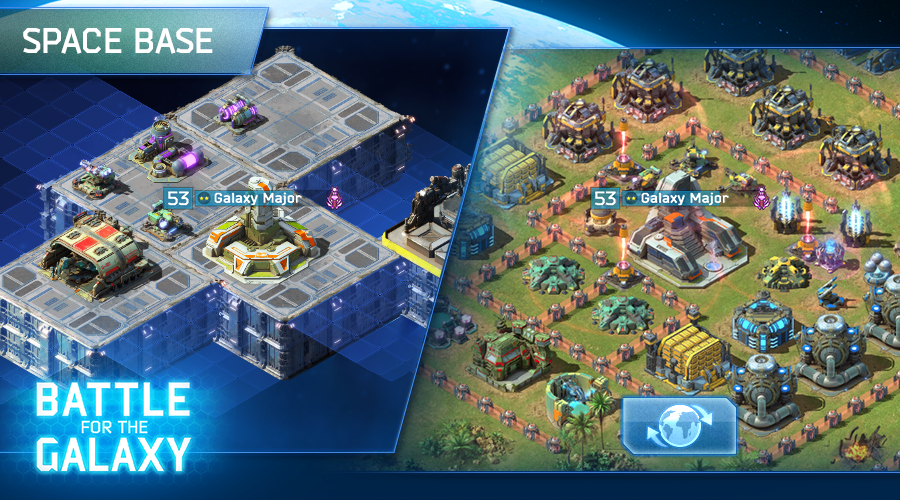 The update 4.0 opens the door to multiple new opportunities for base development and increasing the strength of your army, as well as reconfiguring many of the gameplay characteristics in order to introduce a more interesting and competitive game.

First, it’s an opportunity to build a Space Base which offers you new upgrades for research and Antimatter production.
Just as your opponents, by destroying a main base HQ of your enemy you get access to the coordinates of their Space Base. You can attack it using the Shuttle. If successful, a part of the opponent’s Antimatter supply will beсome yours.

You will finally be able to find out who is the strongest and the most skilled Commander in the Galaxy. In the new Top Players mode commanders will take turns attacking bases of each other, and if the attacking commander deals more damage, he takes the defender’s position among Top Players.

To help new players navigate through the game and have more of them stay longer in the Galaxy, we have decided to introduce a much more simplified functionality of modules and artifacts. We have discarded the Inventory tab, and as of now all operations with modules will take place in the equipment tab of a unit, tower, hero or technology. Same modules will automatically merge and become available for upgrade.

We have changed the strength of the modules on higher levels to make it match the difficulty and cost of their upgrade, and we have also added a few new levels for the modules.

In order to have the same upgrade system in the game, we had to apply new upgrade rules to artifacts as well. This can sound disappointing to the fans of the Endurance Artifact and other super powerful artifacts because now the same artifacts will automatically turn into one artifact of a higher level and there will be no more option to use artifacts of the same type on different types of units, towers, heroes or technologies.

We therefore ask for your understanding of this new feature and as compensation for the inconvenience, we offer you to choose any artifacts you wish in the amount equal to the number of the duplicated artifacts you had at the time of the update, and a complimentary bonus too. We have also significantly increased the chances of getting modules after a successful attack on the opponent’s base and added legendary modules as prize in a corporate war.

We are aware of the issue with using mass and air units with shields and of the way this gameplay mechanics destroys any defense formation, not requiring the players to use their skills. We have given this problem much thought and decided to introduce a counter-mechanics – an upgrade of the Amplifying Tower which allows all towers within its range to ignore the opponent’s shield. We hope that it will increase the number of defense and attack strategies and will add variety to the game and make it more interesting.

Reconfiguring the stats of the Units and Heroes

We have increased the Heroes’ stats to make their strength match their fierce appearance and elite status and to have a reason to build your strategies around them.

Many other units have been improved to increase the variety of the attack strategies at later stages in the game.

Now we are working on an update that will offer you a space fleet command and battles in outer space. Corporation unions, new corporate wars and much more.

We really look forward to your support and will be happy to reply to your questions or just chat in Discord.